SPECIAL OFFERS | REVIEWS | IN AND AROUND | EVENTS | FOTO | NEWS |
BELL TOWER OF THE CATHEDRAL OF PARMA EMILIA ROMAGNA:

BELL TOWER OF THE CATHEDRAL OF PARMA EMILIA ROMAGNA 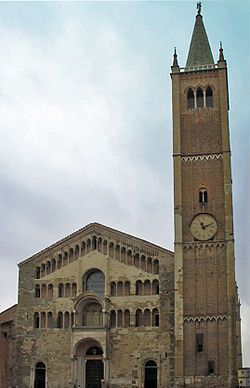 To the right of the façade of the Cathedral of Parma, on piazza Duomo, stands the Bell Tower, 63 metres high.
It was built in Gothic style between 1284 and 1294 to replace a tower more ancient;
the masonry is dark brick, with the exception of the corners, covered with marble blocks.

The Bell Tower is divided into four bands of cornices decorated with ogival blind arches in marble.
The first, that more low, open at the front, two rectangular Windows and a door on the right side; the second band, instead, has openings on the outside.
On each of the four sides of the third band, however, opens a small mullioned window and, on that front, there is the face of the watch.
At the top of the fourth, finally, on each of the four sides opens a window with three, corresponding to the belfry.
At the Summit of the Tower, runs a marble balustrade and the sides there are spires;
the cover is made of a pyramid-shaped Spire, with an octagonal base.

Above it there is a golden statue of an Angel holding a cross, a 15th century copy of the original, now in the Diocesan Museum.
Within the belfry, there are six bells in the chord of b flat major.
The more big corresponds to the note itself â 2 and is known as Bajon.

La Santa Maria Assunta Cathedral is the most important place of Catholic worship of Parma, the mother church of the Diocese of the same name. Piazza Duomo, next to the baptistery and the Bishop's Palace.

Outward is gabled façade in Romanesque style, typical of the churches in other cities of Northern Italy (such as Piacenza and Cremona).
Internally the Romanesque has remained, even though much of the Interior (nave, cupola, transept) are due to subsequent interventions.
Some of the chapels were later painted in Gothic style. In June 1834 Gregory XVI elevated to the rank of minor basilica.

BELL TOWER OF THE CATHEDRAL OF PARMA EMILIA ROMAGNA